I’ve been trying to figure out what to call my husband when I write. ‘My husband’ is too boring, ‘spouse’ too formal, and ‘partner’ too practical (plus one wrong letter and it’s spell-checked into parent, which could cause lots of problems).

Joe isn’t his real name although that’s what most people have called him since he was shipped off to boarding school at 8. And Julian, which is his real name, doesn’t seem to encompass all of his personality. (Hint: spinal surgery in your 50s may be avoided if you don’t jump off roofs in your 20s.)

Grammatical digression: I had no idea that rooves, as the plural of roof, is considered “dated” by the OED. Lisa what is happening?

So, back to Mr. Sudbury. At 5 this morning when I was trying to make tea and got distracted by the many-legged creature (ick a centipede?) skittering through the plaster dust and dog hair on the floor, the name came to me: Mr. Sudbury!

Mr. Sudbury comes fully equipped with a Qantas Platinum card, and a suitcase, carry-on or back pack for every possible occasion. His dodgy spine has recently been upgraded to include fashionable titanium inserts.

You see, before Mr. Sudbury — and some time after Mr. Biarritz who I accidentally married — there were a lot of misters in my life. It wasn’t all serious and they weren’t all dating material but when I was hungover (only once Mum and Dad) and writing up the latest article on the FTSE and other European stock exchanges it sure did make the newsroom banter more fun.

Let me explain. Around the turn of the century texting was just taking over talking as the main means of communication for dating. At the time it might have been briefly called an SMS. For those of us in the newsroom who were single and from other countries, it was very confusing. Trying to figure out the tech bubble was easy compared to trying to decipher the language around dating, or something I called the Non-Date Date.

Once text messaging took over people no longer needed to put themselves on the line and actually ask someone out, or for that matter, break up with them. It could all be done in one grammatically incorrect phrase.

So I’d be sitting at my desk typing away and get messages from Mr. England or Mr Prague like: “We’re heading out to the pub after work.” or  “Going to the cinema with some friends.”

While this may have been confusing it was a lot more fun to think about than bond yields and hedge funds, and because London was such a cosmopolitan place, I started applying a geographical surname for all the men I may or may not have been seeing. Since I had no idea what was going on anyways, I also coined the term the Non-Date Date. Right Ginny?

I’d like to point out that at no time when I was chatting with my journo friends about Non-Date Dates with Mr. Italy or Mr. France, had I ever heard of Mr. Big. I may have known of Sex In The City, but I didn’t have a TV from 1995 to 2002 and there was no Netflix so I’d never seen it. Also I was too busy a) rock climbing, b) writing snappy news pieces on the MSCI Index changes, or c) getting scoops at the pub. Right Candace?

The second thing I’d like to point out is that a few years after I left Bloomberg News, Ginny sent me a published newspaper article about the Non-Date Date, so this proves that I do have good ideas sometimes and maybe I should write about them rather than index-linked funds or, um, belonging.

Later, after I left the fish tanks at Bloomberg News and the pubs in London and moved to Sydney, Australia to be with the current Mr. Sudbury, I had no idea how lucky I really was. I discovered quickly that I had not one man, but several Misters all rolled into one package. And they all liked going to the pub after rock climbing! 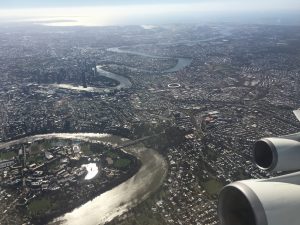 Looking back on it, I can’t believe it’s taken me this long to
figure out what to call him. When I first met Mr Sudbury, he’d already lived in Romania, Abu Dhabi, Nigeria and other places I’ve likely forgotten, and after w got together, he continued to travel around the world several times a year just so I could get that Qantas Gold card and feel like a real person walking into the business lounge.

Actually he travelled so much — even after small children and during renovations — that I was able to track him online solely by his credit card transactions. I know it sounds like fun but his work travel has been more or less arduous depending on the needs and desperation of the company. He’s been in the air for every birthday but one since we’ve been together and that includes his 40th and 50th. If you count only the anniversaries when we’ve actually been in the same city, we’re looking at three since 2004.

Over the years he’s been Mr. Chile and Mr. China, Mr. Laos and Mr. South Africa, Mr. Thailand and Mr. Germany, but Mr Sudbury has definitely been the most exotic. 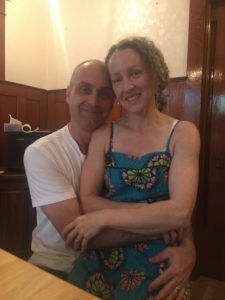 It’s been exciting being married to all these men but Mr. Sudbury will be back Friday night and then hopefully he’ll hang around long enough to pull out a few walls and get the guys waterproofing the basement so the real mess and disaster happens when he’s away on his next trip to… Portugal.

Good-bye Mr. Sudbury and thanks for playing.

Who’s our next contestant?