There is a saying that it takes a village to raise a child. I believe it takes many communities to create a writer, or an artist. Tuesday night’s Wild Readings was another success: all the tables were filled with eager minds who’d come to listen to this month’s line up of wordsmiths.

As the MC, I was consistently impressed by the calibre of the writing, the art, and the music and the willingness of people to share personal stories. My mind was buzzing the night after the event and even though I was exhausted the following day, I sat and wrote my first poem in years. Now if that isn’t inspiration, I don’t know what is.

“Tomorrow wants to eat me because it heard I was soft enough to chew.”  Dushan Bojic

Dushan Bojic has been involved in the contemporary arts and cultural sector for over 35 years. He has interests and practices as a performance and installation artist, sculptor, videographer, playwright, choreographer and poet. His poetry ranges from lyrical post-post modernist, to the downright abstract. He enjoys standing in the one spot and seeing two horizons at the same time. Dushan read from several poems including Cloud 9.5.

We had brilliant in-character reading from Robyn Emerson, including the voice of Google Maps. Robyn grew up in Brookfield when it was still a country town. After working in news and science journalism, she wrote academic speeches and worked in corporate communications. Robyn is now studying her Masters in Creative Writing at UQ. She read from her work in progress, The Attic. It’s a time-slip historical fantasy series for young readers.

Bob and Laurel Wilson gave me a real flavour for what Brisbane was like in the 1970s when I was growing up on the other side of the world. In fact, I made several comments about wanting to hang out on their verandah, but so far haven’t been invited. Bob is a songwriter and journalist who has never been able to decide between one or the other. He and partner Laurel are The Goodwills, a contemporary folk duo. If you listen to Macca on a Sunday morning, you will have heard some of Bob’s songs about life in 1970s Brisbane. Bob’s weekly blog Friday on My Mind evolved in May 2014, mainly from exasperation with the daily media. As Bob told a fan: “not that I want to bite the hand that used to feed me, but I think intelligent readers want more than a picture of Kate Middleton’s bum.” 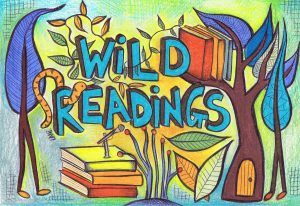 Intellectual powerhouse, artist and writer Kathryn Brimblecombe-Fox talked about three of her recent paintings, dronescapes, which she’d brought for us to enjoy and ponder, then finished it off with a Slam Drone Poem. Kathryn is studying a Masters in Philosophy on how two Australian artists represent militarised technology in their paintings. Her own paintings are exhibited regularly in Australia and overseas and have been on the covers of publications including one by The UK newspaper The Independent. Kathryn’s art has been short-listed for many awards including the Tattersall’s Landscape Art Award. Kathryn is also a keen blogger, consistently posting once a week since 2006 and her blog is being placed in perpetuity on Pandora, Australia’s national archive.

Marianne Wyder, a social worker with a passion for stories, was joined by one of her writers, Hoa Ta, and together they read from Our Sunshine Place, a collective story of recovery and rediscovery of ‘self’ after mental health distress. It is based on the experiences and writings of a group of individuals who meet every month and who have experienced – or who have supported others experiencing – a time of significant mental health distress. In the first chapter of Our Sunshine Place, we met Anne and learned what it’s like to be a psychiatric inpatient. We learned how psychiatric inpatients are denied simple choices yet have a strong sense of community. Later Hoa Ta read one of her personal poems.

We wound up the evening with our open-mic session, Footnotes, where we heard from three different writers, who will hopefully prepare longer works for the coming months.

Saba Abraham, the founder of Mu’ooz Eritrean Restaurant, closed our fourth session by telling us that she founded Mu’ooz to help empower refugee women by giving them employment experience at the non-profit restaurant. This also helps them to learn English, meet people, integrate into communities and contribute to society. Saba, who is a former refugee herself, is also turning Mu’ooz into a community hub, a place for all of us to turn up, eat, read, or write, and belong. Thank you Saba (who is in the featured photo)!

The founders of Wild Readings are Abdul, Lisa, Nerissa, Simon, and me, Kirsten. Wild Readings though is all about you — the writers, the listeners, the artists and the community. If you’d like to read or participate at our March 21st event email wildreadings@yahoogroups. com.

Wild Readings thanks Mu’ooz Eritrean Restaurant for their support and delicious food, Alana Bosgra for the gorgeous Wild Readings artwork she’s designed for us,  Jonathan Sri Councillor for The Gabba in Brisbane for the loan of the PA system, and POP SWAMP for mentioning us.

Wild Readings: for the writer in everyone